Between Bella and Edward all is good until her birthday ! She has one year more than him : she is now 18 ! Alice want to celebrate it during a big party with all the Cullens... However, Bella can hurt herself with everything, even paper...

What will happen if one of the Cullen lose his control ? How Bella would react to a separation ?

I have discovert the Twilight's saga when I was in 5e. During the highscool, I decided to read book in English, so this saga was a evidence. I prefered the first book in English and I think it's the same thing for the second book... I really liked the story, it's maybe a question of vocabulary or of understanding, but I found the story less... gnan gnan ! You know less young...

Even if I know the story, there is a kind of suspens. I think it was, because I didn't know the vocabulary, the way that it was told. I really like the autor's style. It's more interesting in English than in French ! More adult ! I don't know why exactly... I don't feel of the same way the french version and the English !

The caracters are very good ! I like Bella, she is very interesting... Edward is nice too, but I don't understand him behavour... He could check how she felt ! I hope that one day, we will have his point of view. I think it will be very interesting to know what he thinks unless for the two first book. I love Jacob. During all my reading, I have the film in my head, and I have Taylor Lautner in all the scenes ! The Cullen is wanderful but they do nothing for Bella when they leave... neither after until they come back !

The end is good ! During my reading, I have only one preocupation : go to the occasion's library and buy the book four in English, that I saw weeks later ! Finaly I found also the third ! It was book really easy to read... The vocabulary is simple, and it was very pleasant to read it ! I think I will wait few weeks but it will be readen before September !

read for the challenge Lire sous la contrainte, session 21 [my participation] -> not finished on time

Read for the challenge New PAL 2015 [my participation]

"Can you do me a favour ?"
"That's depends on what it is."
He sighed, his lovely face serious. "Bella, the last real birthday any of us had was Emmett in 1935. Cut us a little slack, and don't be difficult tonight. They're all very excited."
It always startled me a little when he brought up things like that. "Fine, I'll behave."
"I probably should warm you..."
"Please do."
"When I say they're all excited... I do mean all of them."

Other books read by this writer :

New moon is the second book of the saga Twillight, written by Stephanie MEYER It comes to the USA. His Frensh title is Tentation. It was published in 2006 for the first time and after in 2009 by Atom edition (and reprinted). It has 497 pages. 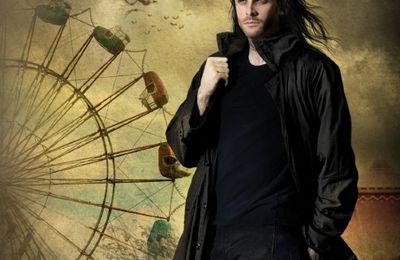